ULAANBAATAR - NUSF Mongolia - The Mongolian Student Sports Federation (MSSF) held its 7th General Assembly on Dec 1st, and 2nd in Ulaanbaatar, the capital of Mongolia. The 1st day, a Seminar was held at the conference hall of the Mongolian State University of Science and Technology, followed by the 7th General Assembly on the 2nd day, held at the “Red Rock” camp. The event was attended by 70 representatives from 30 universities and colleges, including some delegates coming from remote provinces of Mongolia such as Uvs, Khovd, Bayan-Ulgii, Gobi-Altai, Zavkhan, Dornod, Darkhan-Uul and Orkhon.

On the first day, on December 1st, the MSSF organized a seminar for the delegates, including those from regional divisions of MSSF.

FISU Treasurer and MSSF President Mr. Bayasgalan D., AUSF Vice President, Vice chair CIC of FISU and MSSF Secretary General Mr. Jargalsaikhan D., FISU Education Committee working group member and MSSF EC member Mr. Batsaikhan Kh., MSSF Executive Director Mrs. Erdenetuya Ch., and other special guests from the Ministry of Education, Science and Sports of Mongolia, State Authorities of Physical Culture and Sports Mongolia and delegate rectors of universities have made presentations, related to the following topics: the FISU philosophy and its goals, the MSSF’s activity’s final report 2013-2016, the objectives to widen university sports, FISU and Universiade education and scientific research, topics related with the implementation of physical education program in higher education institutions, procedures on celebrating International University Sports Day (IDUS), experimental model of functional and physical cultural training of athletes. Furthermore, a brief informative introduction on the 12th National University Sports Games (National Universiade), that will take place throughout the country in 2017, was made in order to update the participants on the procedure and regulations of the event. The seminar was closed with a discussion and debate session among the participants.

On the second day, Dec.2nd, 2016, the 7th General Assembly meeting of MSSF took place at the conference hall of “Red Rock” camp in Terelj National Park of Mongolia. According to the agenda, Bayasgalan D. President of the MSSF made his report by reviewing the achievements made during the term of 2013-2016, highlighting the good number of competitions and events, the excellent participation of Mongolian delegations at the Universiade games (2013 and 2015), at the World University Championships (2014 and 2016 period), educational programs and interactive activities. He highly acknowledged member universities and clubs’ dedication and contribution towards the Mongolian university sports movement’s expansion. 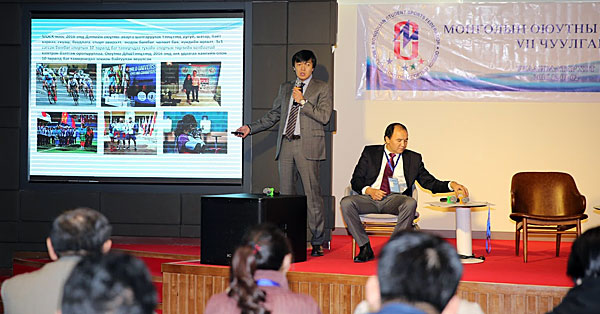 Bayasgalan D. President of the MSSF during his report to the GA

The auditor Mr. Lumjav presented his report on the period 2013-2015. The General Assembly also adopted the action plan for the years 2017-2020. Finally, on the occasion of the event, some proposed key amendments to the MSSF constitution were approved. 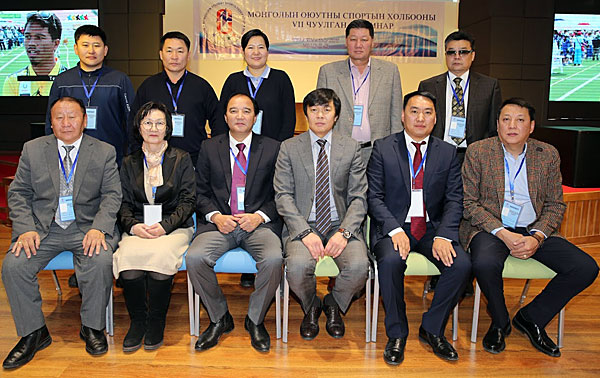 The New executive board

During the session, Lumjav Ts. – President of “Uvs” Institute of Labor, Mr. Baigali Yu. – General Director of “Asar” group, Mr. Usukhbayar M. – President of “Mon-Altius” Physical Education Institute of Mongolia were appointed as Audit Committee members of MSSF by the delegates of the 7th General Assembly.

After these official results, Mr. Bayasgalan thanked the General Assembly delegates for their confidence.

Also, at the occasion of the event, the MSSF awarded : “The Top Universities of the year”:

4. Branch school of Mongolian State University of Health and Science in Gobi-Altai province

- Mr. Ganbold M. lecturer at “Mon-Altius” physical education institute of Mongolia (coach of woodball and bodybuilding) - The Best Coach and Teacher of the Physical Education year of 2016 with the “Honor of Diploma” and memorable souvenirs.